Ethereum – a mining course on how this cryptocurrency works 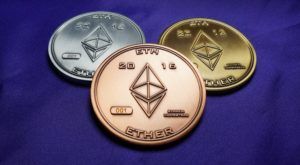 Ethereum (ETH) is both a currency platform and a specific software language. It combines the advantages of protocols based on the original bitocoin and other cryptocurrencies, while offering more freedom and a lot of special functionality. It is designed to allow the construction of various types of applications and then make them available. The system uses cryptocurrency as a medium of exchange in a distributed network of potential recipients of applications created completely independently.

How to make money with ethereum

Ethereum, although it is a very popular cryptocurrency unfortunately its earning potential is still very limited compared to bitcoin for example. Earning is basically limited to mining and trading on the exchange (buy cheaper and sell more expensive). In the case of other cryptocurrencies, such as bitcoin, there are definitely more earning opportunities.

Bitbay is an internationally operating Polish cryptocurrency exchange. One of the cryptocurrencies that can be traded here is Ethereum. The exchange itself can also be treated as a wallet to store ETH.

The platform was presented in 2014 at the North American Bitcoin Conference, being the work of a then 21-year-old student, Vitalik Buterin of Russian-Canadian descent. As a reason for the need to create a new system, Buterin cited primarily the limitations associated with bitcoin and other cryptocurrencies. Ethereum’s advantage over other cryptocurrencies lies in its much broader possibilities. Bitcoin is a perfectly scalable standalone cryptocurrency, however it is much less well suited for use with modifications such as Master Coin or Colored Coins. Ethereum is also a highly scalable and extremely powerful system with far fewer restrictions. The basis of its operation is to act as an efficient protocol foundation, which will form the basis for decentralized applications and other various processes.

Like bitcoin, it is based on the rules of cryptography and the blockchain principle. However, these platforms differ quite significantly, if only in the language of the software. In ethereum it changes all the time, while in bitcoin it remains constant.

Another important difference is the blockchain time. Ethereum transactions are confirmed within seconds, which is much faster than with bitcoin.

The basic algorithm that builds the currency is also different. Ethereum uses ethash, while bitcoin relies on SHA-256 hash.

Both these cryptocurrencies were also created for completely different purposes. Bitcoin is primarily an alternative to conventional currency and is used as a way to invest money or as a means of payment. Ethereum on the other hand is a much more evolved platform which facilitates direct contracts between users. This allows them to use their own currency system and to collaborate on building applications.

Ethereum, like bitcoin, uses a special register to store all transactions. However, it has been completely reinvented so that it can pass a variety of applications built through the Phyton language.

Ethereum is just one of many cryptocurrencies we can monetize. You should also be interested in others, as some of them offer far more earning potential due to their greater popularity. There is also the issue of exchange rate volatility, which is also worth paying attention to in the case of other cryptocurrencies.

The workings of Ethereum

Etherum is distinguished by a scripting language extended to Turing language. Thanks to this, each transaction carried out can use any program that allows the issuance of currency. The communication system is completely distributed, as is its database. Can be used for codification, decentralization and trade in virtually any form. This system is used for financial exchanges, crowdfunding, domain exchange or company management, as well as for drawing up contacts and various contracts. These include smart contracts, which are based on computer protocols. These smart contracts make it possible to make completely anonymous agreements on the Blockchain database.

Ethereum is a cryptocurrency primarily aimed at developers, and it even attracts giants like Microsoft and Intel with its advantages. The purpose of its functioning, however, is not just to popularize another digital currency. This platform helps developers around the world to create and distribute many innovative web applications. It does not compete with bitcoin or litecoin, as it is a completely new solution, supporting the development of open source software.